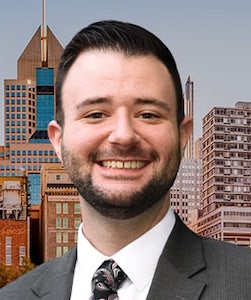 Lisle T. Weaver is an Associate Attorney at Thomas N. Farrell and Associates.

Lisle received his Juris Doctorate degree from Duquesne University School of Law. While in law school, Lisle participated in the Appellate Moot Court program, where he won an award for writing the Best Respondent Brief in the Herbert Wechsler National Moot Court Competition. Lisle was also awarded the Justice Louis L. Manderino Honor for demonstrating excellence in trial advocacy.

Contact Us
Practice Areas
Client Reviews
★★★★★
"This firm is absolutely amazing! From Erika who is sweet and always helpFul. To Tom's right hand ace attorney Lyle Weaver, and the man Tom Farrell is The Top appellate and criminal lawyer in Allegheny county and Pittsburgh!! These men gave me a second chance at my life... and while they are half way there! They got me a new trial, my freedom, and have no doubt they will get me the best resolution possible in the end! As I said Tom screw John Wayne your my hero! Thank you more than words can say!" J
★★★★★
"Polite, courteous, respectful, and nice. Did a great job handling my traffic case." J.A.
★★★★★
"Professional, Personable, Respected by his Peers, Tom Produces Results" D.C.
★★★★★
“Courteous, professional, and knowledgeable… it felt like I was dealing with someone I knew. Lisle provided a quality of service I would have been happy to pay for, but I didn't have to, bill zero” J
★★★★★
"The team did remarkable work. They were sharp, direct, and focused throughout the whole process. Theres a saying that goes quoted by a famous boxer Ali " Dont count the days, make the days count." Everyday they provided there teamwork, arguments, and professionalism to get to the bottom of the outcome and won the case. Im deeply thankful for the hard work and service they gave my cousin!!" L.B.
View More
Submit a Law Firm Client Review